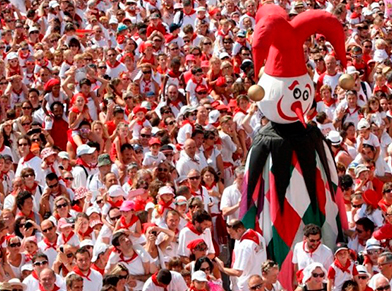 The festival of Bayonne are a festive period in the city of Bayonne which begins Wednesday which precedes the first weekend of August (normally the first Wednesday of August but the beginning was moved forward since a few years because of an influx become too important) and ends Sunday following. In 2004, this festival gathered between 1,3 and 1,5 million visitors, making it the most important festival of France. The rigorous holding is white, accompanied by a scarf and by a red belt (cinta or faja). This holding, non-traditional of the region, results in fact from Navarre in Spain. The festive practice is registered on the Inventory of the French immaterial cultural heritage. The city is a member of the Union of the French bullfighting cities. During the festival two bullfights take place.