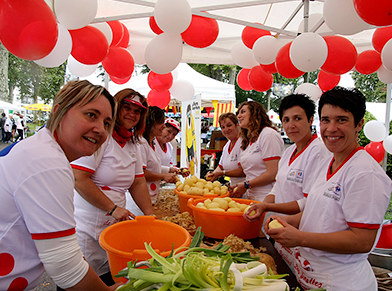 In September 4th, 1993 took place the first “world championship of Garbure” in Oloron Ste Marie.
In front of such a success the organizers decide to create an association “Garburada” to promote and defend this symbolic typical dish.
From now on 20 years, in the public garden, on first Saturday of September around thirty teams have engaged a war to prepare the best “garbure” (typical soup) by respecting the traditional recipe of the ancestral “garbure”. This competition became a big gastronomic and popular festival with its brotherhood as well as of numerous animations, musical groups, regional singings, etc. At the end you can enjoy a meal with 1500 dinner guests in the enjoyment and the good mood